Antietam National Battlefield is a National Park Service protected area along Antietam Creek in Sharpsburg, Maryland which commemorates the American Civil War Battle of Antietam that occurred on September 17, 1862. The area, situated on fields among the Appalachian foothills near the Potomac River, features the battlefield site and visitor center, a national military cemetery and a field hospital museum. Today, over 330,000 people visit the park each year.

In the Battle of Antietam, General Robert E. Lee's first invasion of the North ended on this battlefield in 1862.[1]

Antietam National Cemetery, whose 11.36 acres (46,000 m2) contain 5,032 interments (1,836 unidentified), adjoins the park. Civil War interments occurred in 1866. The cemetery contains only Union soldiers from the Civil War period. Confederate dead were interred in the Washington Confederate Cemetery within Rosehill Cemetery, Hagerstown, Maryland; Mt. Olivet Cemetery in Frederick, Maryland; and Elmwood Cemetery in Shepherdstown, West Virginia.[6] The cemetery also contains the graves of veterans and their wives from the Spanish-American War, World War I and II, and the Korean War. The cemetery was closed to additional interments in 1953. An exception was made in 2000 for the remains of USN Fireman Patrick Howard Roy who was killed in the attack on the USS Cole.[7] The Antietam National Cemetery was placed under the War Department on July 14, 1870;[8] it was transferred to the National Park Service on August 10, 1933.[9]

The Antietam National Battlefield Visitor Center contains museum exhibits about the battle and the Civil War. The movie "Antietam Visit" depicts the battle and President Abraham Lincoln's visit to Union Commander General George B. McClellan. A documentary about the battle is also shown. Park rangers offer interpretive talks. An audio tour is available for purchase to accompany the self-guided 8.5-mile (13.7 km) driving tour of the battlefield with eleven stops.

The Visitor Center was constructed in 1962 as part of the Mission 66 plan. It is being considered for replacement with a visitor center that is more keeping with the historic nature of the Battlefield.[10]

The Pry House Field Hospital Museum is located in the house that served as Union Commander General George B. McClellan's headquarters during the battle. Exhibits focus on period medical care of the wounded, as well as information about the Pry House. The museum is sponsored by the National Museum of Civil War Medicine. 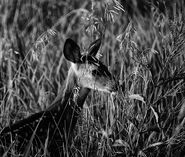 As the fighting in the cornfield was coming to a close, Maj. Gen. William H. French was moving his Federals forward to support Maj. Gen. John Sedgwick and veered into Confederate Maj. Gen. D.H. Hill's troops posted in the Sunken Road. Fierce fighting continued here for four hours before exhaustion overwhelmed both sides.[11]

On the southeast side of town, Union Maj. Gen. Ambrose E. Burnside's troops had been trying to cross Antietam Creek since mid-morning. Around 1 p.m., they finally cross the bridge and took the heights. After a 2 hour lull to reform the Union lines, they advanced up the hill, driving the Confederates back towards Sharpsburg. But for the timely arrival of Maj. Gen. A.P. Hill's division from Harpers Ferry, Burnside would have entered Sharpsburg. Instead, the Union troops were driven back to the heights above the bridge.[11]

The battle was over with the Union sitting on three sides, waiting for the next day. During the night, General Lee pulled his troops back across the Potomac River, leaving the battle and the town to General McClellan.

Community content is available under CC-BY-SA unless otherwise noted.
Advertisement